What does it do?

Mold, that nasty four letter word that causes many of us to shutter at the mere mentioning. Mold is a fungus that produces a superficial growth on various kinds of damp or decaying organic matter. It is found everywhere and can grow on almost any porous substance where moisture and an organic matter, such as dirt or wood, is present. Mold is a natural part of the environment and has an important part to play in nature by breaking down dead organic matter such as fallen leaves, dead trees, and even dead animals.

What does it consist of?

Mold consists of two primary parts – the hyphae and the spores. The hyphae is the “body” or “stalk”, if you will, of mold. It is a 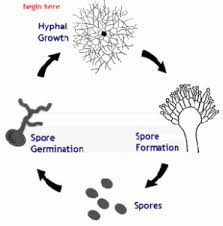 network of tubular branches that form a plant-like “base”. These are the portions of the fungus that absorb the necessary nutrients that enables the fungus to grow. As this network grows, it forms what is known as a colony. As it continues to grow, it reaches a point in its life-cycle where it produces spores. These spores are much like the development of dandelion seeds. There are two types of spores that are present, non-viable and viable spores. Non-viable spores are “dead” spores which do not reproduce. The viable spores are the ones we do not like. Mold reproduces through these viable spores, which are “alive” or “active” and can settle and start new mold colonies. These spores can be released by the millions in a large active colony and once released are carried by air currents. When these spores land on a moist substance suitable for life, they “take root” and begin to grow. This fungus can be found everywhere however it should be minimized indoors because mold can produce toxic agents known as mycotoxins. These mycotoxins act as a defense mechanism for the mold by attacking and killing other living microorganisms so that the mold can continue to actively grow. It is these mycotoxins that many believe have negative effects on human health.

How does it affect me?

There is a wide range of human reactions to mold. People at greatest risk of negative health effects are those with allergies, sinusitis, and asthma. Infants, children, elderly people, and those who suffer from respiratory conditions are at risk as well due to the lack of strength in the respiratory system. Pregnant women and individuals with a weakened immune system are also at risk. Even if you are not allergic to molds, mold exposure can irritate your eyes, skin, nose, throat, and lungs.

Mold, like you and I, needs three elements to survive – – a food source, water, and access to air. While there is no way to totally eliminate all mold and mold spores in the indoor environment; the elimination of any one or all of these three elements is essential to killing mold. Special tip: contrary to popular belief, bleach does not kill mold. It simply removes the color pigment from the mold making it difficult see with the naked eye. The proper way to kill it is by vacuuming with a HEPA filter to capture the spores and then by utilizing a certified biocide to kill the hyphae. A good biostat will help to prevent future growth, however, proper ventilation and keeping surfaces clean and dry are the best ways to prevent mold as it disables its formation. It’s important to remember that if you clean up the mold but don’t fix the problem, the mold will likely return.  If you have questions or just need to have it addressed in your space, give us a call!